Rocket, our healthy, juvenile (though listed as 1 year old since we cannot find the previous owner to verify age) black cat with white paws and adoration for boxes.

Hey everyone Perch here to give you an update on our newest correspondent Rocket (formally known as Sammy) the ex-stray. To give people tuning in this week an update Rocket has gone to the vet and is a spry not-quite-one year old spayed female cat that we picked up off the mean streets of Suburbia, I mean, Tokyo 3.

We’re going to try and not get ranty about how fucked up it is that someone abandoned a completely trained sweet, playful, kind kitten for over a week. Or how there has been no response to the ad placed for their owner to come forward. We here at Evangelion obsession station recognize that sometimes it comes down to the hard sacrifices of feeding yourself or giving up a beloved animal, but we still find it disgusting that Rocket was abandoned, especially since we live in an area with no-kill shelters and given Rocket’s age (still a juvenile in cat time) and sweet disposition she would have more than likely been adopted quickly into a new and loving home.

1. If Evangelion was animated with Cats Rocket would be the go-to new recruit Shinji who falls in line with our other cats….Shoe (Rei) and Poe (Asuka). 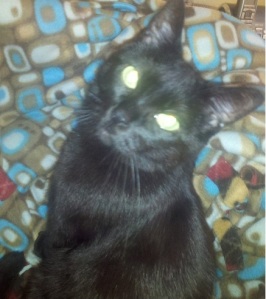 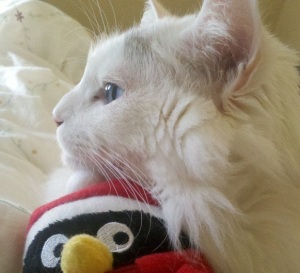 2. Shinji is abandoned by his father and only called on when he’s needed to save the world in a giant mech run on electricity and the soul plug of his dead mother. Rocket was abandoned by her ‘parent(s)’ and when they call on her to save the day Kin and I will be sure to knock them out and steal all their tiny mech suits.

We will totally use our mech cat army for good though. We swear.

3. When Shinji and Asuka meet they don’t get along, their behavior only gradually getting slightly less hostile and more choke-a-bitch as the series gets on. Poe wants to murder Rocket because shes’ the queen around here and no upstart is going to stand in her way.

We’re pretty sure it’ll get better without the apocalypse.

4. In Evangelion there is a vat of Rei clones lined up for various uses; piloting, plug suit dummies, weird bandage fetish enthusiasts on the internet. In Catvelion Shoe sheds enough that we’re convinced there’s an army of tiny Shoe’s hiding around the house waiting for the appropriate moment to strike.

5. In Evangelion Tokyo 3 is a city beset by a fairly polite group of angels who take turns trying to beat it up and get their head boss angel back. In Catvelion Suburbia is beset by holiday shoppers who will pepper spray you as soon as look at you and Santa yields a crowbar.

In conclusion I give our reality’s feline protectors 1 Pen-Pen’s. They’ve seen my Evangelion toys and they’re not impressed. Though they totally attack the screen whenever an Angel comes on and that makes them 50% more useful than Shinji.